And how did you spend Valentine’s Day? 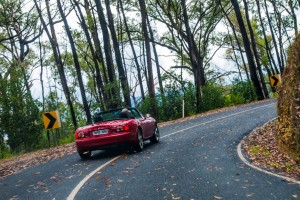 … or getting up early, checking the weather forecast and 5 1/2 hours sitting in a tin box on wheels, in three stages with spurs (and just 50 shades of grey clouds) attached no less – what a choice!

Yesterday’s task was to wash the car in the middle of a thunderstorm with lightning amid heavy rain and overflowing gutters. Early this morning (5am alarm for some) it was cross-the-fingers whilst checking to see if there was any sign the run would be called off.

When Geoff and Bronwyn did their practice run four weeks earlier to check the traffic and run notes they were thinking of bush fires and the possibility of a cancellation due to heat. However this was all for nought as a brave but even dozen clean and wet cars with optimistic occupants and rooves up arrived at Maccas in Doncaster East before Geoff set us off on the first of a three-legged run.

Part 1 – From Doncaster. A quick 40km run, arriving at Kinglake where there were another seven shining MX-5s facing us (a case of Central meets Western) so we did the only thing natural and lined up head to head across the road and went for a chat!

Part 2 – 80km of corners, ups, downs, twists and turns but it was 70km before we saw any dry roads as we approached Healesville for the first time. Many of us took the chance with the weather and dropped our tops and it wasn’t long before the optimists were smiling as fog sank below the clouds and tested our vision. A brave lyrebird rushed across between the lead cars and disappeared into the brush.
And then it was a loop up and over Mt Donna Buang before stopping for a picnic stand up lunch under the still threatening weather and shelter. Not a cloud in the sky over the MCG where Australia were starting to give another cricket lesson to the Poms. Question without notice – of the 19 cars how many left their roof down over lunch? Answer: one. Brave but correct decision.

Part 3 – 105km to Healesville via Marysville. This didn’t seem the longest leg at the time due to the pleasure of navigating the aforementioned turns and twists. Yellow road markings – left, right and centre – were amusing at best. Getting finer by the kilometre but patches of wet kept me honest and without a passenger to suggest an ever so slower speed occasionally. It was more a case of get there as quickly as the depressingly slow speed limits allowed whilst maximising driving pleasure and minimising risk. Maybe more of the former than the latter.

What I do not enjoy is 4WDs hovering over my bumper when there is a string of cars in front, solid white (or even yellow) lines and more curves than a weight watchers festival – one got close enough to read my number plate (no problem with that you may think) but what I did get a bit upset about was he seemed to be using braille to read it …

A most enjoyable day with a minimal number of cyclists all heading towards us, a slow sedan on the last stretch back to Healesville but we’d had our fill by then. I will have to make up the lack of romance to my partner in other ways – perhaps I’ll let her wash my car tomorrow as those wet roads didn’t do my one day old wash any favours?!

So what did you do on Valentine’s day while we were out enjoying ourselves?