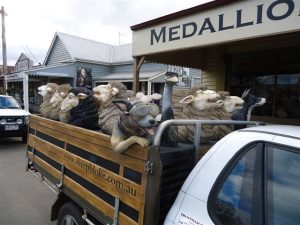 One of the weird things we’ve seen on our runs

Variety, they say, is the spice of life.

Every so often there is a Saturday afternoon run and, as Will Campbell explained, they tend to be occasional, shorter than Sunday runs, afternoons and set to appeal to those that can’t make other events. Easily tempted, my wife and I (sounds regal, doesn’t it?) decided we had missed out on too many runs lately and made the effort to participate in a experience that we had not been on before. (I admit to having to look up Trenthan on the internet portal thingy just to find out where we were headed – when pressed I will admit to being a foreigner.)

So getting to the start line on a Saturday – what could possibly go wrong? A quick entry on the TomTom and we headed off in “plenty of time” and discovered that the designated starting streets split in two are more fun if you get onto the right half sooner rather than later – yes we almost missed it. Ahhh, to be lost! Ever had that feeling that it would be a very quiet drive straight home after getting 99.9% there and just not connecting the last little bit? We went left, we went right. We went left again, just in case. Then, by chance, we spotted two MX-5s (albeit with their rooves up!), and immediately decided this could not be a coincidence as more than one MX-5 in a row makes a convoy – a little heel and toe as I threw the ’box into second, sliding the rear out, a bit of wheel spin and a quick change of direction and, hello, a line of MX-5s and the park as promised in the flyer. Phew, no problem really. Tried to slink up quietly so no-one would notice a couple of shy late comers.

As the departure time ticked on Will and Coral ensured we were signed in and the briefing began. Hills, twists, turns, a touch or two of blue sky between greying clouds – a perfect combination. As soon as the request for the obligatory honorary journalist went out the growing of the blades of grass became irresistible and eyes went down to investigate. My turn I think I heard myself say, to my own surprise. Still, the bottle of wine promised was bribery enough! With first position and last sorted, a few spare radios offered and we were thinking about making sure we didn’t get lost at the first set of lights. Was that first right then left or left then right and set the odometer at the lights or at the first intersection or was that the same thing??

And then a surprise – soon to be past-President Murray (he must have an excellent memory and a pocket full of badges) announced that yours truly and regal spouse were awarded five-year membership badges. Can it really be five years? Wow yes! No regrets … and then, all of a sudden it seemed,  it was time to get belted up, in the nicest possible way of course.

Radio here, scarf just so, seat belt, engine, lights (camera, action anyone). Nice to see some sight seers taking photos of the line up of cars! Setting off, we were one of six that didn’t make the lights (amber is the new red) but great directions and instructions up front kept confidence high and we were soon back in touch with the 13 cars that made up the rest of the pack.

Avoided the pedestrian who was taking his time and headed towards Bendigo, moved left on to the Tulla and then veered right towards Sunbury, right hand turn on to Oaklands Road being watchful of slow moving traffic pulling over to spot planes, a quick left hander then a right, the first of three single-lane bridges so eyes out for oncoming traffic. Left on to Gellies Road, another narrow bridge and some lefts and rights and we were on the Bulla-Diggers Rest Road heading for the next one-lane bridge, following a slow ute and trailer which split the convoy up. Chatter on the radio alerted us that this twisty stretch of road was very pleasant in daylight with sunshine but not recommended if in a hurry to a CFA meeting at night. Will and Coral pulled up beside a bowling green to bring the convoy back together. That achieved, we were off again, over the Calder and left on to Coimadai Road and heading for Toolern Vale where a couple of oncoming cars flashed their lights at us … so we proceeded with more caution in case there was an accident ahead. Plenty of hay for sale but no room in our boot and the wife didn’t want to walk home. Bags of chicken manure smelled cheap at $1.50 but navigator still refused to budge.

Carefully passed an L-plater as we ventured on to a wider stretch of freshly sealed road with a lower than average speed limit (apparently still hovering low after a spate of pre-resurfing accidents) and a short burst on the Western Highway before exiting with some quick turns then a 10km stretch towards Ballarat again. It was refreshing to see the fire warning rating low as we turned right towards Blackwood and Trentham, then on to the gentle conclusion to our driving adventure.

At 3.15 and with 120km on the clock, we pulled up on Albert Street ahead of coffee and a sticky bun at the very well-patronised RedBeard Bakery (http://www.redbeardbakery.com.au/) – highly recommended if you are in the area – very olde fashioned baking process on specialised, in an olde and rare oven (the bakery cooks organic bread in a 19th century Scotch oven). The size of our group stretched their coffee production line for a while but like all good things, it was worth the wait.

My thanks to Wendy and Ron for lending us a radio for the run; it allowed us to remain confident about what was happening way up front as well as towards the end of the cavalcade. Another plus was the consistent waiting at turns; we never felt that we were alone or lost – after having missed a turn once when driving on my own I really like to see people waiting for others! Special thanks to the Todds in JT-000 in front for being patient and waiting for us several times and to Eric, following us on his own, for waiting at corners and for catching up when it mattered. Typically, the further you are away from the lead the harder it is to keep in touch with the procession. Not on this day.

For those, like me, who like closure, this was advertised as “not a Run to Steiglitz”. Wot the? Well, initially it was a run to Steiglitz, however (putting it mildly) when Coral and Will checked the route from a previous run, the café in Steiglitz was no more and there were no local alternatives. So, hats off to the organisers; they invented a new part of this established run. This was a process that took several hours, all so that we could enjoy a rare Saturday Club outing, such is the dedication of the Committee to ensure the events are worthwhile.

FYI, the Club has a bank of runs (re-runs anyone?) that have been tried and tested so if you are contemplating how to take the reins yourself I am sure your Chapter Captain would love to hear from you.

My thanks to Coral and Will for a well research and organised, and enjoyable if rare Saturday afternoon outing.