Not just for fathers … 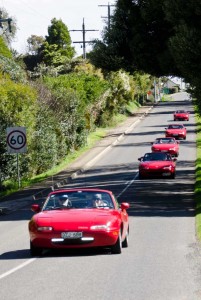 What better way is there to spend a Father’s Day than with a bunch of keen little MX-5s for a cruise around Gippsland?

With a beautiful sunny day forecast we set off towards Drouin. One thing of note on the trip down to the start point – we passed a silver NC … towing a catamaran!

Sitting at the start point we watched the other cars arrive and soon noticed a very common theme. One red one, two red ones, three red ones … Gracie is of course Grace Green and our run leader Trav has a white NA but every other car in the convoy was red! Looks like there is a very bad epidemic of “red” in Gippsland at the moment, with five of the seven cars on the run infected!

Moving out of the car park line in line astern formation, we headed through Drouin and off towards Ripplebrook. This was a quite interesting coincidence as only a few weeks before Wendy and I had gone for a cruise through there and noted that it would be an ideal area for a Club run, particularly in autumn due to the many deciduous trees lining the roadside.

Unfortunately we had a slow ring-in at the head of the column; however we lost them with the left turn into Invermay Road West – a chance to get up to the speed limit and have a bit of fun. Along this stretch of road there were a few curious “furry” patches on the bitumen which invoked a little radio traffic on the subject with one member suggesting it might be an option for lunch.
Although there was a need to dodge the odd pothole or two, it was a great run through to Poowong then down Main South Road’s wonderful curves and bends with some magnificent views across the very green rolling hills of Gippsland.

We headed back through Poowong East where a Danish settlement was established in 1877. More slow cars to hold us up but with a right turn coming up we thought all would be well. Gearing down for the right turn into Burnt Store Road we noticed with a little dismay that our slow friend was turning too. Having lost our little friend we made the left turn into Lardners Track and past the Lardner Park convention centre before descending a perfect hill for photographing a line of MX-5s … only problem was when Wendy turned to take the shot there was not a car in sight. Arriving back in Drouin after completing our first loop it was time for a quick cuppa and some much-appreciated cake which surprisingly had survived the many twists and turns of the first half of the run.

We headed off again and soon found ourselves back on Lardners Track. All went well until I was cresting a hill and was distracted by an oncoming truck – only to look forward again to find Trav stopped at a stop sign on the other side of the hill! Thank goodness for Mazda’s very efficient braking system!

Old Jindivick Road was a nice challenge: a tad bumpy at the start but some very interesting narrow winding sections including some very long bends.

We arrived at the lunch destination of the King’s Arms Hotel in Neerim South a little earlier than planned . Trav advised he had anticipated this and had an ace up his sleeve … we again took off on a sensational 40-odd kilometre “bonus” along some of the best MX-5 roads in Gippsland.

ore sensational scenery with many ducks inhabiting the dams. This scenery came in handy when we encountered a driver who thought he would play it safe – although the advised speed was 50kmh the best he managed was 35! This however was no major drama as the day was glorious: brilliant sunshine and a spectacular vista across the snow-covered Baw Baw ranges.

Finishing the loop back at the King’s Arms we then bid the others a fond farewell and bon appetit as we headed back to Frankston for another engagement.

Many thanks to Trav for organising such a wonderful way to spend a Father’s Day.