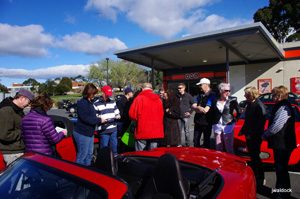 This was the first time that Brandt had organised a run, so the other members naturally expected great things – and we were not disappointed.

Upon meeting at the usual place at the usual time, we were presented with a crossword, a panic envelope and the ‘rules of engagement’ – to get to the mystery destination in the shortest possible time using the least amount of kilometres. (Actually, Brandt did say something about it not being a race, but everyone ignored him.)

Our crossword contained all the clues we needed to find the destination while the panic envelope contained Brandt’s mobile number in case anyone got hopelessly lost.

So, in typical Tasmanian ‘four seasons in five minutes’ weather, we set off, some with tops down but some others choosing the safe ‘tops up’ option. Our initial clues led us to a variety of places in and around the CBD, with lots of fun being had as MX-5s criss-crossed each others’ paths. A common theme was already emerging – lots of the clues were sheep-related (Brandt did not mention any Kiwi heritage when we started!).

The route was beginning to broaden out and led our little cars down the twists and turns of the old road to Kingston, past the Shot Tower with great views of the D’Entrecasteaux Channel and the Iron Pot lighthouse (which was important – more of that shortly).
A required slow down when we reached Kingston due to pesky speed limits allowed the ‘ladybrake’ navigators to reconsider the crossword clues under less breezy conditions. As well as filling in all the clues, we were also required to have some extra items to gain more points (in our particular car, the navigator was chastised by the driver for failing to read all the information, which led to ‘cross words’ of another kind!).

After this small diplomatic incident, we headed off to the ‘dead centre’ of Kingston, a cemetery where a founding family was laid to rest. This turned out to be a tiny pocket handkerchief-sized piece of lawn wedged between houses – the residents of the neighbouring units looked suitably surprised when 10 MX-5s parked in their driveway, people flung open doors and dashed to the next door piece of land then dashed back to the cars which proceeded to roar back to the main road. On with the journey.

We were beginning to recognise the road as a Club favourite, the delightful (for some) bends of the Channel Highway, which took us past Margate, Huonville, Cygnet and Woodbridge with some entertaining stops along the way as we filled in more crossword clues.
Eventually, after some extra stops and retracing of kilometres, we arrived at our destination, GrandVewe Cheeses at Woodbridge. This was the source of all the sheep-related clues as GrandVewe specialises in making cheese using sheep’s milk.
Brandt and Rowena were waiting to mark our sheets and award points at their discretion …

Our winners for the event were Rose and Michael Grubits (shown at right, with Brandt) who, although they racked up more kilometres, gained valuable points for being able to gather all the bonus items – a pinecone, a piece of sheep’s wool and a non-electronic photo of the Iron Pot lighthouse. (As we discovered, a postcard doesn’t cut it, especially when the Iron Pot is just out of the shot anyway!)
GrandVewe donated a lovely gift bag to the first, second and third place-getters and after prizes were awarded, we sat down and partook of an excellent lunch.

It was a great fun day and we congratulate Brandt and Rowena for their organisation. Brandt has promised to organise another run next year and it will be a big ask to top such a fantastic day.