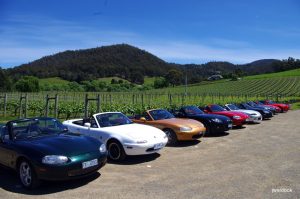 Tasmania … beautiful one day, perfect the next!

So again the Chapter assembled, in sunshine no less.

November’s run was taking us on a bit of a Southern Tas classic, down through the Channel area and back to Huonville, then on to Home Hill winery for a tipple or two.

The day began well, with the run organiser [me] surprisingly on time (for a change). As zero hour approached, more members arrived until we had a grand total of 12 cars. Wine tastings are always popular, or maybe it’s just the drive itself … who knows? Leaving pretty much on time, we headed south through Hobart and Kingston on our way to the Channel area.

Driving through Margate we picked up another car, taking our total to 13 as we headed further away from civilisation. The road is winding and uneven, but has great views of the Derwent River and the D’entrecasteaux Channel, which separates Bruny Island from mainland Tasmania. It’s a popular area for boating and fishing as its within easy range of Hobart.

Anyway, we continued on, fairly uneventfully towards Verona Sands and onwards to Cygnet. We had a trouble-free drive, the roads relatively quiet with no camper vans (always an annoyance at this time of year – all those mainlanders wanting a slice of heaven, I suppose!).

Huonville, and a right turn, continuing to Ranelagh and Home Hill winery. We were very well hosted and tried a number of their wines (only tasting amounts, not full glasses). A number of the group stocked up their cellars for Christmas … or so they said! The group split a little at this stage, some deciding to stay at the winery for lunch while the rest headed back through Huonville to Franklin and the riverside picnic ground for lunch and a chat and some wine (only a little).

It’s funny who you meet on Club runs. While organising our food, our group was approached by two ladies who own MX-5s in New Zealand, so we had a bit of a chat about car clubs and MX-5s in general. It sounds like most car clubs are the same, with interesting personalities, politics and hard-working volunteers who keep it all ticking over.

After lunch, and quite a chat about life in general, it was time to return to civilisation. I would like to thank Home Hill, who so kindly treated us to their wines. I think I know where we will be going for our next more formal lunch!