No rain on this parade! 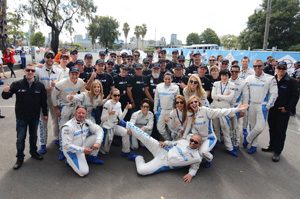 The weather gods smiled on us this year, keeping things fine and dry for our display and Mazda3 Celebrity Race parade lap at the 2014 Rolex Formula 1 Australian Grand Prix.

The owners of 22 of the Club’s finest MX-5s (well, the lucky 22 who were first to answer the call), had pole position on the fun of the four days at Albert Park.

Courtesy of Mazda Australia, back for a second year as sponsors of the “Celebrity Race”, we had passes for ourselves and a guest each for the four days, as well as lunch and hospitality at the Mazda pavilion.

Oh, and the fun of meeting and chauffeuring some of Australia’s most popular celebrities around a lap of the track on Grand Prix day on the Sunday.

Given what we saw last year, we all made very sure we were firmly in the driver’s seats, although this year’s crop of celebrities seemed much better behaved than last year’s lot.

I’m not sure who had the biggest smile – president Don was pretty happy with Mazda3 ambassador, Lauren Phillips, Alex Hailstone had Torah Bright (OK, no-one on the planet has a bigger smile than Torah!), Peter Corkran had Catriona Rowntree, Daniel White had Rachael Finch … I was very pleased to get Charley Boorman, of “The Long Way Round” motorcycling travel epic fame.

Thanks to everyone who displayed their cars for the four days, and to Ben Rounsefell, Steve Maciver, Emily, Alecia and Simone from Mazda Australia and Toby Ward of the AGP Corporation, who made it all possible.

If we’re invited back again next year, I recommend you put your hand up!