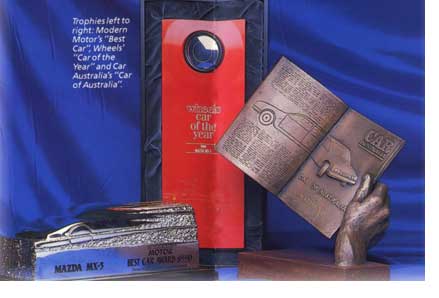 Never before has a sports car won any of the awards offered by Australia’s three major motoring magazines. It was, therefore, unprecedented that Mazda’s new MX-5 sports car should have won any, let alone all three.

The oldest award is presented by Wheels magazine which, on three out of the award’s 26-year history, has declined to nominate a “Car of the Year”, so demanding are the criteria.

The MX-5 was judged by nine critics — including journalist staff members, race drivers and a former automotive industry engineer — and it won six of their primary votes to become “Car of the Year”.

Car Australia gave the sexy two-seater the nod after staff members compared the vehicle with a shortlist of other vehicles released on the Australian market during 1989. There was little doubt as to which vehicle best fulfilled this magazine’s criteria — the MX-5 — and so it became “Car of Australia 1989”. It also won the “Best Sports Car” category.

Modern Motor has given the judgement of “Best Car” of any of the last 10 years to Australia’s motoring press corps which numbers in excess of 40 full-time writers. Journalists are given 20 points to allocate to the year’s offerings, with no one vehicle to receive more than 10.

By the largest margin ever in the 10-year history of this award, the MX-5 became the “Best Car of 1989/90”, thus completing the “trifecta”. Again it won the “Best Sports Car” category with this magazine.

Numerous awards have been given to the sports car overseas — the USA’s Road and Track described it as one of the best five cars in the world; Time said it is “one of the best designs of the decade”; Automobile gave it “Automobile of the Year”. More are expected following launches in Britain and Europe this year.

Why has the MX-5 been so heralded?

According to the critics, the car combines classic sports car characteristics (suspension, steering, styling) with modern technology (twist-free body, roof easy to raise and lower) so well that it is worthy of these awards.

They note the sheer pleasure of driving, the sporty exhaust sound and the absence of distracting gadgetry.

The MX-5 ushered back a golden era that has been absent for more than 20 years. And the critics loved it!

Many awards given, and “more are expected” … and more came!

The following are just some of the awards achieved around the world after 1989 launch:

And the tradition of excellence continues ..

In 2005 the new NC model won the prestigious Wheels Magazine “Car of the Year” award. Click here to read why …

In 2016 the new ND model won the marque’s third Wheels Magazine “Car of the Year” award, make it three out of four for the Mazda MX-5. Click here to ready why …